Webcam Trelleborg - Parking of trucks in the commercial port

About webcam "Parking of trucks in the commercial port" in Trelleborg

Trelleborg, a city and port in southern Sweden on the Baltic sea. In the middle ages it was an important herring-fishing and commercial center, but it has ceased to be such after the herring left the area in the 15th century. After the looting during war (1563-70) between Denmark and Sweden, and devastation by fire in 1617, it lost its Charter and was restored to its former status of a city until 1867. With the launch of the service boat in Sassnitz ( Germany ) in 1897, then paralogy in 1909, the city grew. Because of its ferry connection Trelleborg was the focal point for the transportation of the sick and wounded and exchange of prisoners during the Second world war. Being the southernmost city of Sweden, Trelleborg is the main crossroads in continental Europe, it supports a lively coastal trade. Modern, well-equipped harbour was promoted by industrialization, in particular, sugar processing and production of rubber products. On site Trelleborg Parking of trucks in the commercial port, where purchasers of goods and those who are waiting for the arrival of the goods. She is now under the lens of the camera stream comes into the network around the clock.

Most popular webcams in Trelleborg

Webcam Trelleborg, Marina at the seaport 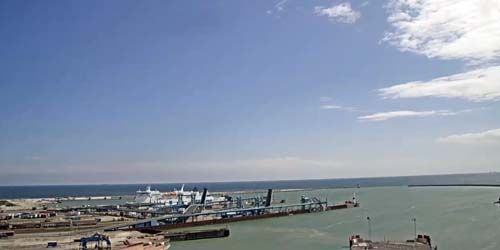