Live cameras in Slavyank. Live webcams Slavyank onlineSlavyank. The city of Slavyansk is located in the north of the Donetsk region. It is the regional center of the Slavyansk region. Several city-forming enterprises are located in the city. These include: Slavyanskiy plant of high-voltage insulators, Betonmash, Kerammash, Salt-welding company, Slavyanskiy mechanical plant, Slavyanskiy resort. Slavyansk is famous for its beautiful nature. The population of the city in 2014 was 90,000 people. The State Pedagogical University is located in Slavyansk, which makes it very visited by students from all over Ukraine. The city has more than thirty webcams with different views. Thanks to the cameras installed in the city, you can watch the events taking place on Cathedral Square, parents will be able to see how their kids play on playgrounds near the executive committee and in other parts of the city, drivers will be able to estimate traffic congestion, everyone can see the weather conditions online. Thanks to the active work of local leadership, the number of cameras in the city is constantly increasing. Cameras also play an important role on the crime situation in the city. Thanks to the large number of cameras installed in microdistricts Artema, Chemist and Central, the number of new crimes has significantly decreased, and the number of crimes committed has increased. Slavyansk is the first city in Ukraine, where in 2002 a camera was installed with online broadcasting on the Internet on central square.

Most popular webcams in Slavyank

Webcam Slavyansk, View of the square

Webcam Slavyansk, Parking at the Bravo store on Artema

Webcam Slavyansk, Volleyball in the Park

Webcam Slavyansk, A home for immigrants

Webcam Slavyansk, The roof of the house for migrants on the streets of Chubar

Webcam Slavyansk, Basketball court with training apparatus in the park 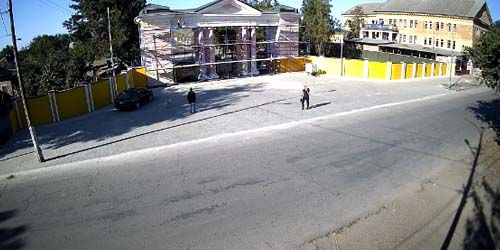 Share webcam Slavyank with your friends in social networks

Do not forget to watch other live streams Slavyank