In the town of Kusatsu there is a large thermal pool and a few foot baths (ashiyu), which can be freely used by tourists. One of them stands next to Yubatake, and the other can be found near the bus station building. Other attractions related to the baths in Kusatsu are the Ons Museum on the third floor of the bus station, which tells the story of the city of Onsen and Kusatsu, as well as the traditional way of cooling hot water to a bathing temperature that includes dancing and singing. The swimming pool is 10 minutes walk from Yubatake. Opening hours: from 7:00 to 20:00 (from 9:00 from December to March). The entrance closes 30 minutes before closing. Entry: 600 yen. This large open air bath (rotenburo) in Sainokawa Park is one of the largest in Japan and is wide enough to accommodate more than 100 bathers. The place of rest offers pleasant seasonal colors that look spectacular in the autumn and snowy forests in winter. To estimate the big pool it is possible and not going to the country, it is enough in an on-line mode to activate the web camera installed here.

Most popular webcams in Kusatsu

Webcam Kusatsu, Panorama from a height 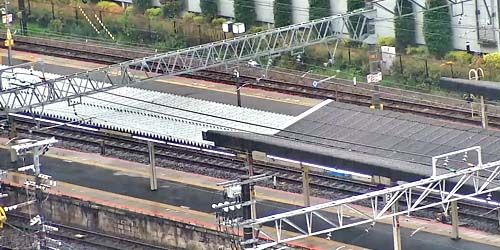