Live cameras in Moscow. Moscow is the capital of the Russian Federation, a city of federal significance, the administrative center of the Central Federal District and center of the Moscow region, which is not part. The largest city in the population of Russia, the population of the city is fifteen million people. It is the most populated city of Russia and is one of the top ten cities in the world by population.

The city is located on the Moscow River in the center of the East European Plain, between the rivers Oka and Volga. As a subject of the federation, Moscow borders with the Moscow and Kaluga regions. It is an important tourist center of Russia. Many architectural sites of the city are included in the UNESCO World Heritage List, these include: Red Square, < a href="https://webcam.scs.com.ua/en/europe/russia/moscow/kremlin/">Kremlin, Novodevichy Convent and Ascension Church in Kolomenskoye. Moscow is the most important transportation hub. The city is served by five airports, nine railway stations, and three river ports. The metro has been operating in the city since 1935.

Moscow webcams - a great opportunity to enjoy the atmosphere of the capital of a large country. The metropolis has an interesting environment, which is nice to watch from different angles. This territory is famous for its monuments, squares and parks, there is a beautiful architecture, celebrations and other elements. The user can choose any device without restriction, activate the desired angle and spend time. And given the abundance of space, it will take a lot of time, create a collection and carefully study everything.

This is a large city, so there is a lot of equipment installed to ensure safety and constant monitoring. Starting with intercoms, ending with conventional cameras, you will have many choices: 1. Spacious streets and courtyards, many of which have not only parking lots, but also platforms for children, various crafts from citizens and multi-colored walls. Only at first it will seem that everything is the same and gray, but in fact there are a lot of interesting things. 2. Long roads and intersections that are considered to be long and stagnant. Moscow traffic jams will definitely not let motorists relax, and observers can find something original, with a variety of car models and funny situations. 3. Significant objects of cultural heritage, this is a value in the capital: monuments, architectural creations, unusual decorations and numerous places of memory. 4. Places of pastime of citizens: playgrounds for children's games, crowds on sidewalks, alleys and near entertainment venues. Cases when you can witness a large-scale concert or mass dancing are not rare. 5. Concentration of people: mainly periodic meetings, festivities, flash mobs and much more. 6. Do not forget about Arbat, which is the most demanded in terms of interest. You can watch him forever, there is just an active population, holidays are often held, you can meet street talents, etc. 7. Red Square will not be left without attention. Around it there are many cameras that show several directions in detail. It extends over a long distance and often becomes the epicenter of some events.

You can long list the benefits of Moscow webcams. And the best option is a personal study of everything available, which will provide relaxation, obtaining new knowledge. A favorable moment is the constant updating of content, which replenishes the collection and brings variety. In this catalog everyone will find something unique for themselves: urban infrastructure, beautiful views and fun. Absolutely every equipment is charged with positive, uniqueness and high-quality picture. All this should be enough to get emotions and impressions.

Most popular webcams in Moscow

Webcam Moscow, View of the Kremlin and the Moscow river

Webcam Moscow, The corridor in the dormitory on Alexis

Webcam Moscow, May Lake in Sokolniki

Webcam Moscow, Church of the Holy Apostles Peter and Paul

Webcam Moscow, The view from the Church of the Holy Trinity Church

Webcam Moscow, The view from the heights

Webcam Moscow, The sun in the telescope

Webcam Moscow, Altar in the church of the Holy Apostles Peter and Paul

Webcam Moscow, The football field of the club Megasphaera

Webcam Moscow, The main entrance to the Sokolniki Park

Webcam Moscow, Prayer in the mosque

Webcam Moscow, Ant under the microscope

Webcam Moscow, Yard of a residential building in Yasenevo

Webcam Moscow, Holidaymakers on benches near the fountain in Sokolniki

Webcam Moscow, Workshop on the restoration of vintage cars

Webcam Moscow, The veranda of dances in the park Sokolniki

Webcam Moscow, Entrance to the entrance in one of the houses

Webcam Moscow, The Ferris wheel in the Sokolniki Park

Webcam Moscow, Parking at the fourth pavilion in Sokolniki

Webcam Moscow, In one of the courtyards of Mozhaysk district

Webcam Moscow, The area in front of the central entrance to Sokolniki

Webcam Moscow, Yards in new buildings on the outskirts

Webcam Moscow, Construction of a residential complex on the Amurskaya

Webcam Moscow, Entrance to the dance floor in Sokolniki Park

Webcam Moscow, Parking in front of the pavilion №3 in Sokolniki 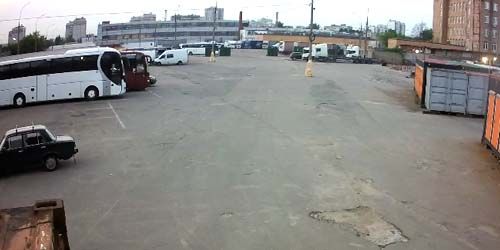 Webcam Moscow, The area of the metro station Nagatinskaya 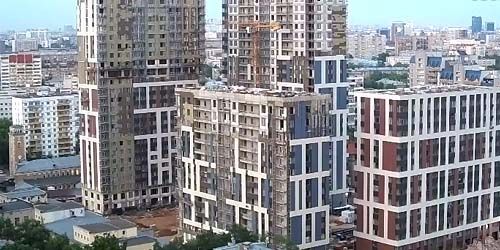 Webcam Moscow, Temple of the Prophet Elijah in the Warm Rows

Do not forget to watch other live streams Moscow