Live cameras in France. Live webcams France online France. France is associated by most tourists with romance, here seeking for a honeymoon couple here and sing a wonderful feeling as love. Indeed the French are very peaceful people. They are passionate and active in life, a lot of time to devote to the emotional side of his own life, however, they are fairly prudent in terms of financial issues, but a few people know. France attracts primarily for its tower, which was included in the protected objects of UNESCO. It should say that it is the only country in the world where you are allowed to marry or to marry late, but such a marriage does not give the rights for further inheritance. The journey on the territory of France will be very exciting if you know and that every district of Paris is a small Autonomous state with its own domestic laws. The farther from the center, the more likely it is to meet with the illegals and get in big trouble. A great alternative to the high costs a virtual journey. On the territory of the country is the webcam video stream with them allows you to explore the many cultural landmarks and just a street from your computer screen online, simply connect to the Internet. Camera to watch anyone can network for free, there are no restrictions on location or age of the user. Now you can in just a few hours to explore almost the whole of France, to learn something new or to draw their own conclusions about where you want to spend a holiday in this country.

Most popular webcams in France

Webcam Paris, The Suburb Of Athis-Mons

Webcam Paris, View of the city from a height

Webcam Nice, The dock at the coast

Webcam Albertville, Mountain village of Les Arcs at an altitude of 1950 meters

Webcam Les Sables-d'Olonne, Pools and beaches on the shore of the Bay of Biscay

Webcam Marseille, Panorama of the bay from a height

Webcam Biarritz, The Central beach and the lighthouse on the cliff

Webcam Paris, Cafe in the center

Webcam Ile d'aix, Panorama of the Strait of Antioch in Biscaya Bay

Webcam Biarritz, Rocks on the coast and extreme surfing

Webcam Lanyon, The Coast Of Perros-Guirec

Webcam Anglet, The coast with its beaches

Webcam Le Lavandou, Coco beach on the shores of the Balearic sea

Webcam Morlaix, The Coast Of Carantec

Webcam Noumea, Beach on the beach

Webcam Briancon, Alps in the vicinity of Puy-Saint-Vincent

Webcam Saint-Quay-Portrieux, The beach on the West coast, Strait of the English channel

Webcam Hyeres, Coast of the island of Porquerolles

Webcam Fort-de-France, Panorama of the island of Martinique

Webcam Albertville, Les Arcs (Savoie) at an altitude of 2000 meters

Webcam Briancon, Kummun St. Veran at an altitude of 2000 meters in the Alps

Webcam Albertville, Ski lifts to the mountain in Les Arcs

Webcam Saint-Malo, Panorama from the spire of the fortress

Webcam Etretat, Panorama of the bay from a height

Webcam Gustavia, Parking at the airport

Webcam Gustavia, View of St. Barthélemy from the height

Webcam Saint-Malo, Panorama of the shore in Erki

Webcam Nice, Panorama from above

Webcam Saint-Malo, Panorama of the bay

Webcam Perpignan, Pools in Le Barcares on the coast of the Balearic Sea

Webcam Gustavia, Private yachts in the port of Saint-Barthelemy

Webcam Albertville, Ski resort in the Pyrenees at an altitude of 2000 meters

Webcam Lorient, The ebb and flow of the ocean in the commune Plouinec

Webcam Porto-Vecchio, Panorama of the bay from the height

Webcam Morlaix, Panorama of the bay in Saint-Paul-de-Leon

Webcam Kahn, Beaches on the coast of Trouville-sur-Mer

Webcam Hyeres, The coast of the peninsula of La Madrag 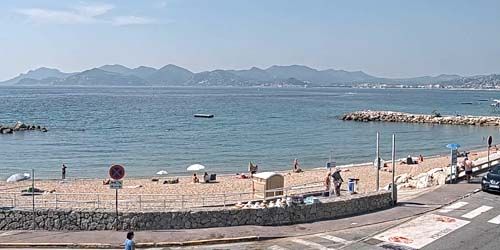 Webcam Saint-Pierre-d’Oléron, Fishing pier on the island of Oleron

Webcam Ploudalmezeau, Parking on the waterfront

Webcam Briancon, Mountains at an altitude of 1600 meters in Pelva

Webcam Clermont-Ferrand, Panorama from the top in the resort of Le Lioran

Webcam Castres, The wind generators of the commune Pradel Kabardes

Webcam Gerardmer, Panorama of the resort of La Bresse

Webcam Pont-Saint-Esprit, Embankment river Ardèche of the village of Saint-Martin

Share webcam France with your friends in social networks

Do not forget to watch other live streams France